This vegan ice cream shouldn’t really fall under the category of “protein” ice cream, but we’re going to make an exception.

I dislike pretty much every healthy ice cream out there (Halo Top, Enlightened, etc), but once I decided to try Nick’s light ice cream, it blew them all away.

While not as high in protein as other options, it is far and away the best “healthy” ice cream I’ve ever tried.

And, since I’m a curious person, I just had to try the vegan line to see how it stacks up.

Nick’s vegan ice cream is a light ice cream that is made without any animal products but does contain milk protein.

If you’re wondering how in the world that’s possible, don’t worry, I was really confused by it at first, too.

Nick’s ice cream partnered up with “Perfect Day,” which is a company that has found a way to make cow’s milk containing dairy protein but without the use of cows.

The Nick’s website breaks it down better than I can:

Our partners at Perfect Day have innovated the world’s first animal-free whey protein that’s identical to protein in cow’s milk but without any cows!

This product is lactose free, but contains dairy protein produced without the involvement of any animals. A lot of people have issues with lactose, but a smaller group is actually allergic to dairy protein. That’s why we say “contains milk allergen.” It’s simple!

So, to make a long story short: if you have a milk allergy, this ice cream won’t be for you. But if you’re simply looking for a solid vegan option, you can enjoy these no problem!

Now, if you’re wondering what “Swedish-style ice cream” actually is, I truly have no idea. I’ve reviewed Nick’s ice cream three times now, along with their protein bars, and I have still not figured out what makes them Swedish-style.

All of their products are low in calories, so maybe everything in Sweeden is low-calorie? Trust me, I’ve been searching for an answer to this question for over a year now, and I’ve still come up with nothing.

Anyway, I tried 6 different flavors of Nick’s light vegan ice cream, so let’s get into it.

Strawbär Kräm, or strawberry cream, was definitely my favorite flavor out of all Nick’s vegan ice cream flavors.

The ice cream itself is incredibly creamy, and it tastes like authentic vanilla ice cream. Not only would you never know that it was low-calorie ice cream, but there’s no chance you’d be able to tell that it’s vegan, either.

The strawberry swirl in the ice cream is pretty minimal, but the flavor packs a real punch. As a fan of all things strawberry, this flavor does not disappoint.

Vegan or not, this one slaps, as the kids say. Fans of strawberries should jump all over this one.

When I tried the regular Nick’s ice cream, the peanut butter cup flavor was one of my favorites.

The peanut butter ice cream lacks creaminess, and it is somewhat crumbly in nature when you take a scoop. All in all, it reminds me of any other low-calorie ice cream pint out there.

The peanut butter flavor is certainly decent, but the lack of fudge in the “peanut butter fudge” was a huge letdown for this pint.

Call me crazy, but when I hear hazelnut fudge, I think of Nutella. I suppose my mind shouldn’t immediately go there, but that’s the iconic chocolate & hazelnut combo.

If you’re like me and hoping for Nutella, then this hazelnut fudge flavor is going to be extremely disappointing.

If you’re simply a fan of hazelnuts, however, you may love this one.

The ice cream is hazelnut flavored, so it’s overall very nutty tasting. To me, it just tastes like an overly sweet vanilla ice cream. There are some small pieces of fudge mixed throughout the pint, but they are few and far between.

If this were a creamy chocolate ice cream, this one would be WAY better, in my opinion.

If you obsess over all things chocolate, allow me to introduce you to your new best friend.

This “choklad choklad” pint (which I interpret as double chocolate) is nearly perfect.

There are plenty of chocolate chunks throughout the pint, which is a really great addition. Whereas some of the other flavors just haphazardly throw some tiny fudge swirls into the pint, these crunchy chocolate chunks are the perfect way to infuse even more chocolate into this vegan ice cream.

Caramel swirl is about as silky smooth as any light ice cream you’ll ever come across. I absolutely loved the texture of this one.

And while you may be disappointed in the above photo’s lack of caramel swirl, I can assure you that the caramel flavor is very prominent throughout this entire pint.

When you do hit that creamy caramel swirl, the flavor is unbelievably delicious. But even without it, the caramel ice cream has a very satisfying caramel flavor on its own.

I have to plead the fifth on this pint, because I absolutely despise all things mint chocolate.

I mean, that’s probably pretty evident by the fact that there is only a tiny spoonful missing from this pint after trying it.

To be fair, the spoonful I took reminded me of Andes mints. Granted, I haven’t eaten those in probably 20 years, but that’s because I truly dislike anything mint chocolate flavored.

Considering this tasted like those chocolate candies, I have to imagine this is a solid flavor, but I truly cannot tell you whether or not it’s good… because I hate it.

I am thoroughly impressed by these vegan ice cream pints. Considering how much I love the original Nick’s ice cream flavors, I had a feeling I would also enjoy these pints, and they did not disappoint.

If you are looking for a vegan ice cream alternative that is also healthier, there’s no reason to NOT give Nick’s a try.

Granted, not every flavor was a winner in my book, but as far as overall taste and texture is concerned, this blows other options straight out of the water.

The only true downside here is the price. At $9.99 per pint when ordered online, it’s extremely expensive, especially when there’s a minimum of $50 for shipping. Notice how the pints just under $10 each, so you have to get a 6th pint to qualify for shipping. Sneaky sneaky.

With these vegan ice cream pints, I definitely recommend trying to find them in stores to save yourself the trouble of having to commit to such a large order. Nick’s does have a store locator, which you can find here, so hopefully, you can find ’em near you! 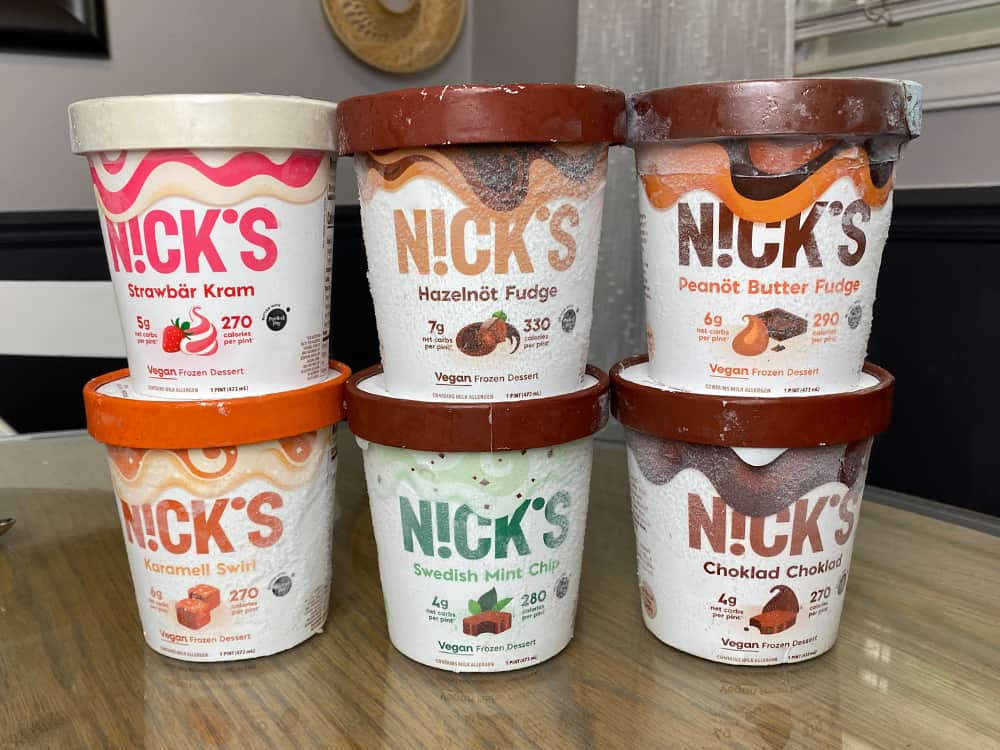 REVIEW: Nick’s Swedish-Style Vegan Ice Cream
Summary
You would NEVER know that this is vegan ice cream, let alone a low-calorie version of vegan ice cream. While not every single flavor was a winner for me, the overall creamy texture and authentic ice cream flavor make these absolutely worth trying in my mind.
Texture
8
Flavor Accuracy
6.5
Nutrition
8.5
Overall Taste
7
The Good
Very creamy right out of the freezer
Low calories & carbs for an entire pint
Tastes identical to dairy ice cream
The Bad
Every pint has a lack of mix-ins
Not every flavor is as accurate as I'd hope
Very low in protein overall
7.5