Use our protein bar comparison tool to find ANY protein bar based on calories, macros, or price!
Protein Bars & Candy
·

Quest Peanut Butter Cups have been around for many years but have recently been reformulated.

When Quest Nutrition first released their high-protein peanut butter cups (originally known as “Quest Cravings”), they were very dry and chalky. Flavor-wise, I actually enjoyed them, but my standards were also very low back then.

That was about 10 years ago, and the landscape of the protein snack world has changed tremendously.

But, looks are certainly not everything. Do these actually taste like Reese’s Cups?

Yes and no. Allow me to explain.

First things first, Reese’s Cups have a very distinct texture to them. The chocolate coating is soft and almost melts in your melt, and the peanut butter filling is chalky yet still very moist.

Based on looks alone, Quest Peanut Butter Cups are incredibly similar to Reese’s Cups. The chocolate is a little bit darker, but if you compare these to the dark chocolate Reese’s, they are almost indistinguishable.

Once you bite into these peanut butter cups, the differences become apparent.

While the chocolate may not be too noticeably different for you, the peanut butter filling is where you can really tell the difference.

Reese’s Cups are obviously famous for their delicious peanut butter filling, so I would never expect a healthier alternative to be a spot-on replica of that (although, my homemade protein peanut butter cups are surprisingly close). However, it’s a little bit disappointing to find the peanut butter filling to be on the creamy side.

Reese’s cups make their filling by combining peanut butter with powdered sugar, which is obviously not what Quest is going to do with a low-carb snack. Because of this lack of sugar, the filling is mostly just regular peanut butter.

Now, that’s not to say it’s a bad thing: everybody loves peanut butter. But it doesn’t eat quite the same way as a Reese’s Cup.

But, with all that being said, Quest Cups are identical in size to Reese’s and eat very much like any other “healthy” peanut butter cups you may have come across at the store.

This is obviously the reason you’re here, so let’s talk about the flavor of these Quest Peanut Butter Cups.

I should say off the bat that I think these are an amazing alternative to Reese’s if you’re on a low-carb diet. I like to be critical in my reviews because I believe honesty really helps you to make informed decisions, but I don’t want to sound overly negative! I truly do enjoy these.

But, they definitely taste different than Reese’s Cups.

I performed a blind taste test on these Quest cups vs Dark Chocolate Reese’s to see just how similar they were. To be as fair as possible, I crushed both up and put them into Ziploc bags because I knew that I’d be able to tell the difference if I bit into each of them.

Still, it was very clear which was Reese’s and which was a Quest Cup.

Since Reese’s Peanut Butter is just so iconic and recognizable, it’s nearly impossible to replicate, especially without any sugar.

You can definitely taste the sugar substitute in these Quest Cups, too. That flavor doesn’t bother me at this point, but if you’re sensitive to that “artificial” taste, then you may not like these peanut butter cups.

Overall, there is great peanut butter and chocolate flavor, but it’s noticeably different than Reese’s, and the artificial flavor really comes through.

There’s a slight bitterness in the aftertaste (due to the low-carb nature) that I can see being off-putting for some, but it’s not enough to prevent me from enjoying these as a snack.

More recently, Quest released Mini Peanut Butter Cups, and I’m not sure what it is exactly, but these remind me more of Reese’s than the full-sized cups.

Maybe it’s the foil wrapping or the ideal peanut butter to chocolate ratio, but these mini cups are very enjoyable.

Everything I said about the full-sized cups still holds true for the mini cups, and there is definitely an artificial flavor present, but the overall flavor is really good.

While Quest Peanut Butter Cups may not be a spot-on replica of Reese’s Cups, they are a great alternative for anyone on a low-carb diet.

As a high-protein snack, these Quest cups are not the greatest source of protein. With 190 calories and 11g of protein, it’s certainly a decent amount of protein, but you’d like to see that number a bit higher.

For comparison, the dark chocolate Reese’s contain 200 calories and 4g of protein per pack. When you look at calories alone, the Quest cups don’t offer any real advantage, and an extra 7g of protein over the originals may not be enough to entice you.

But, if you eat low-carb or low-sugar, these Quest cups are exactly what you need. With less than 1g of sugar and only 1g net carb per serving, it’s the perfect replacement for candy if you’re in need of something low carb.

Are they as good as Reese’s cups? Certainly not. But as a lower carb and higher protein alternative, they’re a great option. 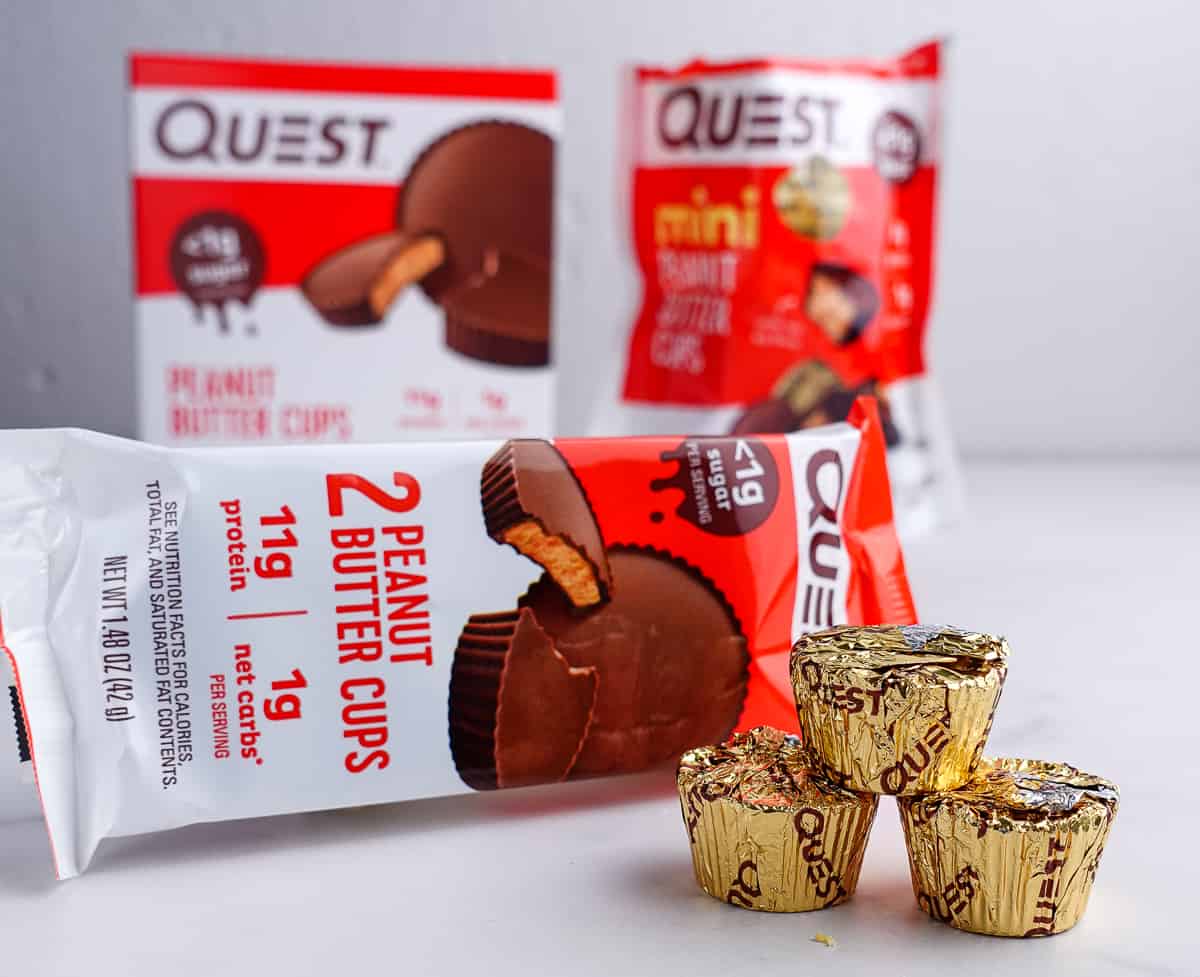 REVIEW: Quest Peanut Butter Cups & Mini Peanut Butter Cups
Summary
Quest Peanut Butter Cups are exactly what you need if you are on a low-carb diet and miss candy (specifically Reese's). While it's certainly not identical to a Reese's Cup, and there is a distinct artificial sweetener flavor, it's definitely close enough to satisfy those candy cravings.
Texture
7.5
Flavor Accuracy
7
Nutrition
7
Overall Taste
7.5
Aftertaste
5.5
The Good
Texture and flavor similar to a dark chocolate Reese's
Virtually carb free
Look identical to Reese's cups
The Bad
Only 11g protein per pack
Peanut butter much smoother than Reese's peanut butter
Has a noticeable sugar substitute flavor that might be overpowering for some
6.9
Give It a Try
Buy from Quest 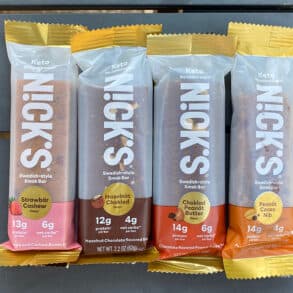 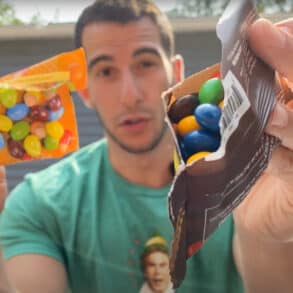 My Experience with Thistle Meal Delivery